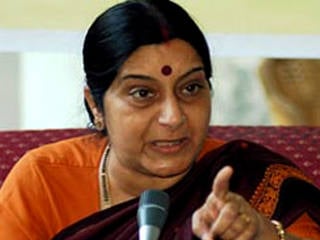 BJP stalwart and former External Affairs Minister Sushma Swaraj passed away at the age of 67 on the night of August 6 after suffering a cardiac arrest.

The senior BJP leader was brought to AIIMS at 10:15 PM and was straight away taken to the emergency ward. However, Sushma Swaraj was very critical at the time she was brought to the hospital. Unfortunately, Swaraj did not respond to the CPR done by the AIIMS doctor and passed away in the hospital.

Sushma Swaraj’s body was then taken to her home, Dhawan Deep Building in Connaught Place, New Delhi. On Wednesday at 12 PM, her body will be kept for three hours at the BJP headquarters today for party workers and leaders to pay tributes, Later her last rites will be performed at the Lodhi Road crematorium at 3 PM.

Sushma Swaraj and her husband had vacated the government bungalow allocated to her just days after the second term of the Modi government began. She had announced earlier that she would not be a part of the new government. She had had a kidney transplant earlier.

Sushma Swaraj started her political life with the Akhil Bharatiya Vidyarthi Parishad, the RSS’ student wing and later joined the BJP. She had also played a key role in strengthening the BJP across the country in the early 1990s. At 25, she had become the youngest cabinet minister in the then Haryana government. She eventually went on to become the Information and Broadcasting Minister in the 13-day Atal Bihari Vajpayee government in 1996 and got the Cabinet portfolio again after he led the BJP to power in 1998.

Swaraj then contested against the then Congress president Sonia Gandhi in Bellary in the 1999 Lok Sabha polls. Sushma lost the elections but rose to be one of the tallest leaders of the country. Sushma Swaraj, a protégé of veteran BJP leader LK Advani, was also the Leader of the Opposition in the Lok Sabha between 2009-14. Sushma Swaraj was a seven-time MP and three-time MLA.

PM Modi remembering the former Foreign Affairs minister, tweeted that “a glorious chapter in Indian politics comes to an end.”

“India grieves the demise of a remarkable leader who devoted her life to public service and bettering lives of the poor. Sushma Swaraj Ji was one of her kind, who was a source of inspiration for crores of people,” the PM tweeted.

“An excellent administrator, Sushma Ji set high standards in every Ministry she handled. She played a key role in bettering India’s ties with various nations. As a Minister we also saw her compassionate side, helping fellow Indians who were in distress in any part of the world,” PM Modi tweeted. PM Modi termed the demise of Sushma Swaraj as a personal loss.

Political leaders across the political spectrum have expressed their sadness and offered condolences to Swaraj’s family.

Swaraj had redefined the relationship between the people and the government. Using social media to its fullest extent, she had reached out and helped countless Indians stranded in other countries. Often, a mere tweet calling for help was enough for her to reach out and provide help in the most difficult of scenarios.