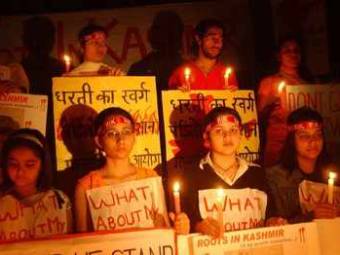 Jammu : Kashmiri Pandits will not return to the Valley till the Centre carves out a separate centrally-administered Union territory for their rehabilitation, an organisation representing the community said on Sunday.

The Panun Kashmir also demanded abrogation of articles 370 and 35A of the Constitution, claiming that these had led to displacement of Kashmiri Pandits from the Valley.

Referring to a reported meeting between moderate Hurriyat chairman Mirwaiz Umar Farooq and a group of displaced Kashmiri Pandits, who also met several BJP leaders over the past two weeks, Panun Kashmir chairman Ajay Chrungoo dismissed the move as a “ploy” by the Centre to compromise with the separatists.

Kashmiri Pandits will not return to the Valley till the Centre carves out a centrally-administered Union territory along the Jhelum river for the community, he told reporters.