Gurugram : The district lawyers blocked Rajiv Chowk on Thursday morning after a Sohna-based advocate thrashed around a week ago succumbed to his injuries at a hospital on Wednesday night. They demanded immediate arrest of all the accused in the case. So far, police have nabbed five persons, including a woman, in connection with the attack.
Around 9am, the lawyers affiliated to the bar associations of Sohna and Gurugram gathered at Rajiv Chowk with the body of Naveen Yadav and placed it on the main road. Within minutes, tailbacks were seen on Sohna Road affecting traffic till Subhas Chowk, and the road leading to the district courts and the police commissioner’s office.

The protesters demanded a compensation of Rs 1 crore for Naveen’s family, a government job for his wife, apart from immediate arrest of all the seven accused and transfer of the case from Mewat to a fast-track court in Gurugram. They dispersed after nearly 40 minutes, following assurances from deputy commissioner Amit Khatri and DCP (west) Sumer Singh Yadav, who rushed to the spot to pacify the protesters. 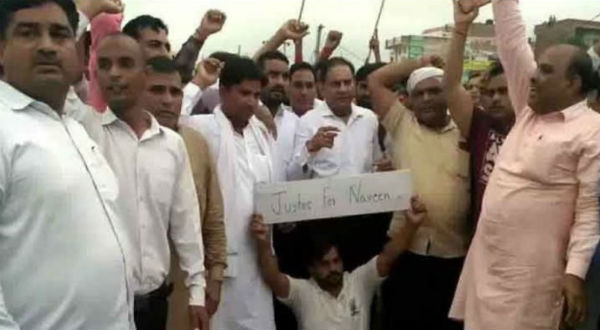 “It’s shocking that a lawyer died while performing his duty. We want strict action against the accused and financial help to his family because his two children are minors. He was the sole bread earner of his family,” said advocate Kulbhushan Bhardwaj, former president of bar association, Gurugram. Other lawyers said a joint meeting of Nuh, Sohna and Gurugram bar associations is slated for Friday to chalk out future course of action.

According to police, 31-year-old Naveen, a resident of Udaka village in Nuh district, was brutally thrashed by some residents of the village on July 19, while he was returning home from Rojka Meo police station where he had gone to help two families reach a legal comprise.

The feud between the two families started with a small fight between two girls, aged 8 and 6 years, daughters of Jamshed and Akhtar, respectively, in Udaka on July 15. Members of one of the families attacked Naveen with bricks and cricket bats. Another lawyer who tried to save him was also attacked.

When contacted, SIT head DSP Dharmbeer Singh said, “Five of a total of seven accused have been arrested in the case. All were produced in court and sent to judicial custody.”

Police said they have deployed over 100 cops in Udaka village and ruled out rumours of mob lynching. “Naveen’s murder can’t be a case of mob lynching,” said a senior police officer.