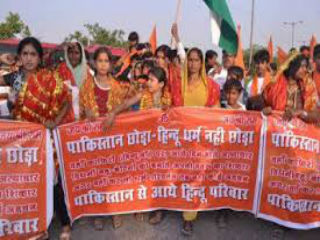 New Delhi : A demand to mount international pressure on Pakistan over the issue of forceful religious conversion of minority Hindu and Sikh girls was raised in Rajya Sabha on Thursday.

Raising the issue through a Zero Hour mention, Kirodi Lal Meena (BJP) said several parts of Pakistan have seen a spurt in incidence of abduction of young Hindu girls for forceful religious conversion after the Pulwama attacks.

Temples have been destroyed and Sikhs thrown out of Gurudwaras, he said, adding around one thousand girls have been forcefully converted.

Pakistan, he said, is not safe for minorities from human rights angle and its government is not serious about protecting interests of minorities.

He asked the Indian government to help build international pressure to stop atrocities on Hindus, Sikhs, Christan and other minorities in Pakistan.

“International pressure has to be built to stop religious conversions,” he said.