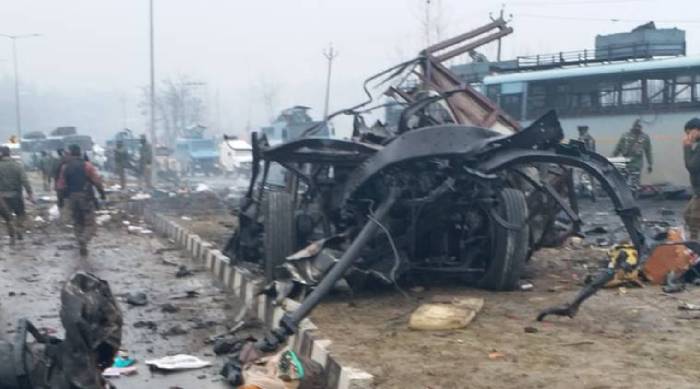 New Delhi : The Jaish-e-Mohammad over ground worker (OGW) who provided the vehicle for the February 14 Pulwama suicide bombing and was killed along with his recruiter in a gunfight with security forces on Tuesday in Anantnag district of south Kashmir, had been radicalized in a religious seminary.

The two terrorists killed in an encounter in Bijbehara, Anantnag on Tuesday were identified as Sajad Maqbool Bhat, one of the members of the Pulwama suicide bombing squad and his recruiter Tauseef Bhat, categorized as a serious threat in police records.

Radicalized at an Islamic seminary where he studied religion for three years, Sajad, a resident of Bhagpora Marhama Bijbehara, Anantnag, on February 4 had bought the Maruti Suzuki Eeco van used for the terror attack that left 44 CRPF jawans dead.

Documents accessed exclusively by the TOI reveal that Sajad fled his home eight days after the attack, just when the investigators had discovered his role as the logistics man in the bombing. As an over ground worker, Sajad had been conducting reconnaissance of the area and providing information to Jaish regarding the movement of security forces. He had been missing since February 22, as per a police report registered at Sangam.

The Eeco van which the suicide attacker Aadil Ahmad Dar rammed into the CRPF bus at Lethpora, had been sold to Mohammed Jaleel Ahmed Haqani, a resident of Heaven Colony in Anantnag in 2011, and subsequently changed hands seven times before it reached Sajad.

However, it is not clear how Sajad managed to raise funds to buy the vehicle, since he himself was merely a student. Sajad studied at madrassa Taleem ul Islam Marhama for three years after his seventh standard. He was enrolled at Government Higher Secondary School Marhama for 11th standard, when he fled home to join as an armed terrorist with Jaish-e-Mohammad. His picture where he was seen holding weapons, appeared on social media soon after he absconded while the police had launched a manhunt for nabbing members of the Pulwama suicide bombing module.

The other terrorist, 23-year-old Tauseef Bhat, killed in the gunfight at Bijbehara on Tuesday, was a B.A. third year student of distance learning and had joined the Jaish during Ramzan on June 12, last year. Like Sajad, Tauseef was also from Bijbehara, Anantnag district. A resident of Kodi Angan Marhama area, Tauseef used to run a ‘darasgah’ a religious organization in evening hours.

His pictures as an armed terrorist had also appeared on social media. Documents reveal that police categorized him as a “great threat” for Anantnag town, National Highway and adjacent areas. Police records described him as someone who had the capacity to organize well-planned attacks on security forces and motivate youth particularly stone-pelters of the district, especially of Anantnag and Bijbehara towns to join militant ranks.

“It is now clear that Tauseef had recruited Sajad for Jaish. From here on, Tauseef as a recruiter of Sajad, will be part of the NIA investigation into the Pulwama terror attack,” a top official in Srinagar told TOI.

Hanumān, Son of Pavan – Deity of the wind.