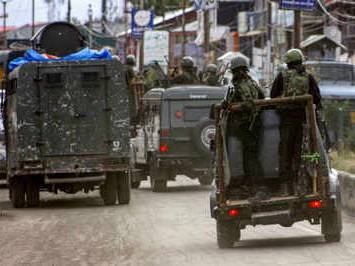 Srinagar : Five CRPF personnel, including two officers, who were deployed on picket duty were killed in south Kashmir’s Anantnag district on Friday afternoon when terrorists attacked them while they were checking vehicles. IG CRPF Ravideep Sahi told TOI that this was the first attack on CRPF after the February 14 suicide bombing in Pulwama in which the paramilitary force has suffered casualties.

A Pakistani terrorist was also killed as CRPF and police personnel retaliated. Five persons, including the SHO of Anantnag Sadar police station, three CRPF jawans and a woman pedestrian, were injured in the attack, which comes less than three weeks before the annual Amarnath yatra to the cave shrine located in south Kashmir begins.

A lesser known terror outfit, Al Umar Mujahedeen, has claimed responsibility for the attack. However, police believe that Jaish-e-Muhammad – which owned up the Pulwama suicide bombing in which 40 CRPF personnel were killed – is behind the attack. Police sources said the material recovered from the slain militant, including an AK47 rifle, pointed at Jaish’s involvement.

Official sources said a joint team of the Bravo company of CRPF’s 116th battalion and Jammu & Kashmir police was checking vehicles at a barricade they had put up near the Oxford Presentation School at Khanabal-Pahalgam road when two terrorists came in a car around 4.50 pm. While one of the terrorists wielding AK-47 rifle got down and started firing indiscriminately, the other one remained in the car, eyewitnesses said. He later managed to escape, an official spokesman said.

SHO Arshid Khan, who reached the spot moments after he received information about the attack, sustained a bullet injury on his chest as soon as he alighted from his vehicle, eyewitnesses said. Khan has been admitted to Army’s base hospital in Srinagar where his condition is critical.

Medical superintendent of district hospital in Anantnag said five injured CRPF personnel were brought to the hospital. Three of them died during treatment.

The deceased CRPF personnel have been identified as ASIs Nirod Sarma and Ramesh Kumar and constables Satendra Kumar, Mahesh Kushwaha and Sandeep Yadav. While the ASIs are from Assam and Haryana, respectively, the constables are from Madhya Pradesh and Uttar Pradesh.