Actually there is nothing like ‘Hindu terrorism’ nor Hindus are terrorists. Kamal Hassan is making such cheap statements just to get votes. Why don’t he speak a single word about ‘Islamic terrorists’ who are responsible for innumerable attacks on Indians ? Why Kamal Hassan kept his mouth shut when suspected Christian extremists along with naxalites killed Swami Lakshamanananda Saraswatiji for opposing conversion of Hindus ? – Editor, Hindujagruti 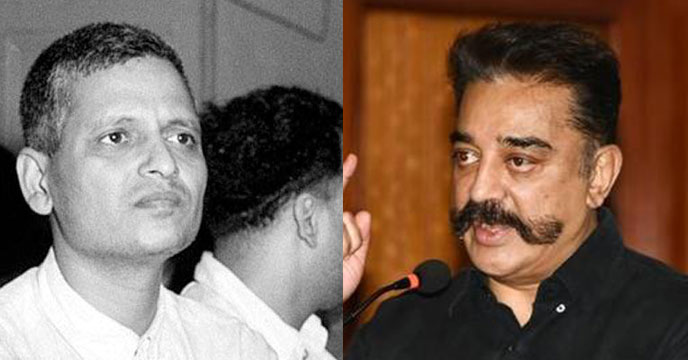 Independent India’s first “terrorist was a Hindu”, actor-politician Kamal Haasan told an election rally on Sunday while describing Mahatma Gandhi’s assassin Nathuram Godse. (Why doesn’t he speak about ‘Who is first Islamic terrorist’ in this country ? Everyone knows about the existence of Islamic terrorism and Hindus in India are its biggest victims ! – Editor, Hindujagruti)

The comment drew a sharp response from the state BJP, which slammed the Makkal Needhi Maiyam founder for indulging in “divisive politics”.

The Congress and the Dravidar Kazhagam, a rationalist organisation floated by the late E.V. Ramasamy, better known as Periyar, however, backed the MNM leader.

Haasan, who was addressing an election campaign in bypoll-bound Aravakurichi on Sunday night, said he was one of those “proud Indians” who desired an India of equality and where the “three colours” in the Tricolour, an obvious reference to different faiths, “remained intact”.

“I am not saying this because this is a Muslim-dominated area, but I am saying this before a statue of Gandhi. Free India’s first extremist was a Hindu, his name is Nathuram Godse. There it starts,” he said, possibly referring to extremism. (If Kamal Hassan wants to say, ‘Terrorism has Religion’, then he should also tell that, after independence how many Hindus and Muslims become terrorists and how many people did they kill ? – Editor, Hindujagruti)

Haasan said he was a “self-assumed great-grandson” of Gandhi and had come “seeking answers for that murder”, alluding to Gandhi’s assassination in 1948.

“Good Indians desire equality and want the three colours in the Tricolour to remain intact. I am a good Indian, will proudly proclaim that,” he added.