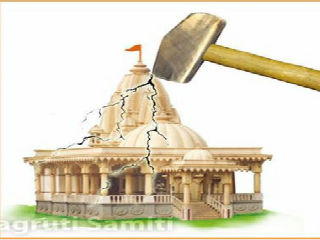 Kanakon : A Christian has demolished under construction Shri Hanuman Mandir at Karashiramal, Agonda which has created furor amongst local Hindus. The President of Kanakon Komunidad intervened in this matter and after promise to reconstruct the demolished part of the temple by Christian, the atmosphere has calmed down.

The news in detail is in the year 1974, few local youth took initiative in constructing Shri Hanuman Mandir on Komunidad’s land and constructed walls of 3 metres height for the temple; but  owing to lack of funds, the construction remained incomplete and was later neglected. Ayavo Fernandes from Agonda (Igarjwada) took disadvantage of the situation and grabbing 1500 sq mtrs land near the above temple at Kanakon Komunidad; constructed a house in unauthorized manner. Considering the half constructed Hanuman Mandir being paid no attention, he, in one night, demolished 3 mtrs walls erected for the temple and leveled the whole land. Strong reactions were given by local residents as they realized the matter. Local residents have demanded that Dy. District Collector of Kanakon should take a serious note of the same and take action. Shri. Sharad Naik Gaonkar, the President of Kanakon Komunidad intervened and assured Hindus of finding solution. Later Ayavo Fernandes promised to again erect the demolished walls only then the atmosphere calmed down.