If one Govt servant can amass so much of wealth, imagine how much corrupt politicians must be amassing ? We need a strong Govt who will take stringent action against all such corrupt officials, politicians, businessmen and others and only Hindu Rashtra can give us such governance ! – Editor, Hindujagruti 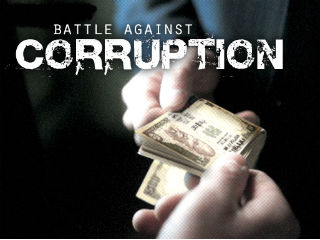 The taxman had swooped down on a dozen premises linked to 1979-batch Indian Administrative Service (IAS) officer Net Ram on Tuesday after it obtained “credible inputs” that the former top bureaucrat and his associates have made “accommodation or bogus entries of about Rs 95 crore from Kolkata-based shell firms” in the past, including during the post-demonetisation period, they said.

They said that during the searches, that are still ongoing, the department recovered a total of Rs 1.64 crore in cash from three houses in Lucknow and Delhi, while another Rs 50 lakh is believed to be stashed in a bank locker, which will soon be opened.

Crisp pink notes of Rs 2,000 form the bulk of the cash recovered, they said.

The officials claimed that the former bureaucrat was “negotiating” for a Lok Sabha ticket from a UP-based party and that is when he came under the scanner of the tax department.

It is understood that the taxman launched the raids after obtaining vital details of these transactions from the Financial Intelligence Unit (FIU) and subsequently mounting surveillance on the officer and his associates.

Documents related to 30 ‘shell’ firms, in which Net Ram’s family members and in-law’s were shareholders, have been recovered and are being scrutinised.

“The officers’ in-laws were also raided and they have expressed complete ignorance about the suspicious transactions that are under the tax radar,” a senior official said.

In a few cases, they said, the children of those who are being raided have been found to be the “authorised” people for operating the accounts of shell companies detected, the official said.

The searches resulted in the detection of six properties in posh locations of Delhi (KG Marg and Greater Kailash-I) and Mumbai (Babulnath on Charni road and Huges road) and three houses in Kolkata purchased “out of bogus share capital of Rs 95 crore”, the officials claimed.

As per an I-T department search memo accessed by PTI, the sleuths have recovered “handwritten diaries recording transactions for acquiring shell companies and investments in properties in various locations of UP and Delhi” during the action.

Luxurious interiors at a house in Lucknow and one at GK-I in Delhi, a mini theatre and gym have also been found built, they said.

Net Ram was secretary to then Uttar Pradesh chief minister Mayawati during 2002-03, her third stint in power in the state.

The officer has served in various capacities in UP, including heading the excise, sugar industries and cane department, stamp and registration, food and civil supplies department.