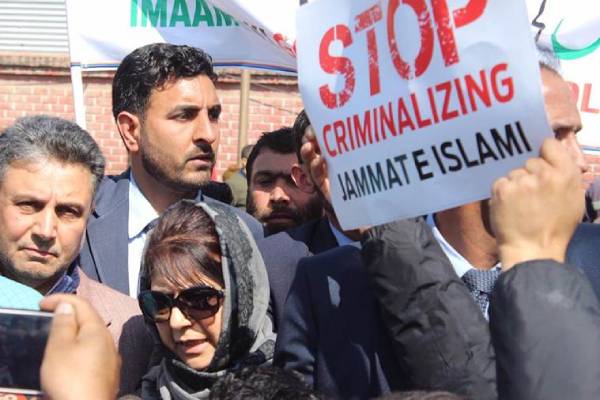 In the wake of a continuing crackdown against the Jamaat-e-Islami (JeI) across Kashmir in which over 350 activists were detained, former Jammu and Kashmir Chief Minister Mehbooba Mufti on Wednesday held a protest in Anantnag, demanding that the ban against the group be lifted.

Mufti, who had condemned the Home Ministry move to declare JeI an “unlawful organisation”, also demanded the release of the outfit’s elderly members and warned she would escalate her agitation.

“We want that the ban must be lifted. We will go to the district level now, then we will go to every segment. Elderly people who have been arrested must be released,” ANI quoted the PDP chief as saying.

Banning the organisation for five years under Section 3 of the Unlawful Activities (Prevention) Act (UAPA), the Home Ministry last week said the JeI was “involved in anti-national and subversive” activities “intending to cause disaffection”.

As several PDP workers took to the streets on Wednesday, Mufti said the party would continue its agitation till the ban against JeI was lifted. “We will protest in every nook and corner of the Kashmir valley until the Centre lifts the ban on Jamaat-e-Islami and release its members,” she said.

Reacting to the ban, Mufti had warned the Centre against its muscular approach. “Why is GoI so uncomfortable with Jamaat-e-Islami ? Radicalised Hindu groups representing fringe elements are given carte blanche to spread misinformation and vitiate the atmosphere… Is being anti-BJP anti-national now?” she had said last week. (There are so many evidences against ‘Radicalised’ jihadi and Islamic organisations, but no evidences have been found against any ‘radicalised’ Hindu organisations ! Now all Hindu organisation must unite and demand action against pro-jihadi Mufti and others, who are also maligning Hindu organisations ! – Editor, Hindujagruti)

The National Conference had also questioned the ban and said it would only hamper the peace process. “By banning JeI, the government will achieve nothing but giving it a dissident glamour. The move will not help; it will rather impede the process of reconciliation and rapprochement in our state,” NC general secretary Ali Mohammad Sagar had said.