Defamatory ‘No place for Hindutva’ sung and Subversive ‘Hello China Bye Bye India’shown in an You Tube video uploaded by Imphal Talkies against Citizenship Bill. 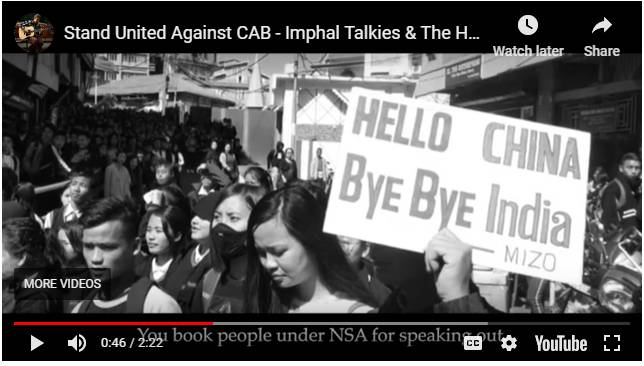 Upananda Brahmachari | HENB | Haridwar : A very disturbing 2 minutes and 22 seconds long black and white video being a compilation from the various protests and rallies against Citizen Amendment Bill (CAB), National Security Act (NSA), AFSPA (Armed Forces Special Powers Acts), BJP and Hindutva has been uploaded in YouTube by some Music and theatrical Group(s) named as Imphal Talkies & The Howlers.

The Rap Music video was uploaded on 4th Feb 2019 which went extreme to condemn many Acts and Bills under Indian Constitution and challenge Indian Govt crossing all limits. It also ridiculed Indian system of Govt machinery as ‘clowns and puppets’. Not only that it claimed  their land of ‘ancestors’ as the ‘kingdom’ is older than Indian Nation.

However, it is not known how their land perhaps including Manipur and Pragyotishpur (now Assam) both were mentioned in Mahabharata which was supposed to be a landmark identity of Bharat as Maha Bharat including almost all the territories of Aryavarta in the light of a profound Nationality and Patriotism established under Vedic roots and faith.

But, what is most disgusting that the music video highlighted a poster describing, “Hello China, Bye Bye India” poster from a protest scene from a Mizo group may be connected with some certain Christian network.

The music video titled as “Stand United Against CAB” sung this lyrical composition as under:

It’s been decades since you colonised
And now you wanna give away my kingdom
You shot my brothers in the streets of Tripura
And now you wanna arrest Dr Hiren Gohain
You book people under NSA for speaking out
How big is your prison, I wonder?
You been killing us with AFSPA
How big is your morgue, I wonder?
Thanks for your atrocities. Now we stand united
Against your BJP, Against your CAB
Against your propaganda, Against your government
You want the land but not the people
Oppression has been your culture
You want to write new history and fables
But my kingdom is older than your nation
You want to build your empire on our land
With your clowns and puppets
You dream to build your empire in my land
But, this is a kingdom made up of my ancestors’ sweat, blood and flesh
No place for you
No place for Hindutva
No place for Fanatics
No place for Politics
We have learn how to have fun
Amidst the guns and militarisation
Here we are to take you down
And your fascist regime

The Music group as Imphal Talkies & The Howlers thanked in the video to some Jimmy Thokchom, Biju Samom, Biju Das and Hayum Lab. It could not be verified by this website whether they had any link with Fanatic Christian Groups in North East India or some Left Wing Extremist (LWE) groups provoked by the Chinese conspirators.

The North East states have been facing troubles by the Jihadis, Missionaries and LWE groups only to disconnect the Hindu roots from that remote but indivisible territories of India. Hence, the fundamental motive of the “Stand United Against CAB” against Indian Rule of the Land, Govt, Majority People, Hindutva, BJP and welcoming China as the Savior in Indian Soil is quiet unacceptable.

Govt in Ministry of Information and Broadcasting

The Govt in Ministry of Home Affairs

for taking down the video from the YouTube immediately.

Through this write up, it is fervently requested to Govt of India in Home Ministry and Ministry of Information & Broadcasting for taking down video, “Stand United Against CAB” from YouTube and from all internet strings with immediate effect.