Drive away this danger of conversions to Hindu Dharma through surgical strike in the form of law ! – Manoj Lasi, BJP, municipal councilor Ulhasnagar (Dist. Thane) : Law banning conversion of religion is made applicable by six States in our country and on similar lines, such law should be passed even in Maharashtra, is the demand of all Sindhi community. By carrying our surgical strike, danger to security of this country was eliminated; so also the danger of conversion of religion should be removed by surgical strike in the form of law. Everyone should join this movement staged by Hindu Janajagruti Samiti (HJS) by bringing together all organizations, stated Shri. Manoj Lasi, BJP’s municipal councilor. Law banning conversion of religion should be passed in Maharashtra was the demand for which a march was taken out by Hindus at Ulhasnagar. Shri. Lasi addressed the march.

Christian missionaries’ activities by offering different bait for conversion are increasing in Maharashtra on large scale. Christian missionaries have taken advantage of helplessness and problems faced by rich as well as poor Hindus and by luring them, more than 1 lakh Sindhis and Hindus from other communities have been converted by missionaries. A march was taken out at Ulhasnagar on 14th January against the demon of conversion, unanimously deciding to stop Christian missionaries. Saints and office bearers of various pro-Hindu organizations including HJS, municipal councilors of political parties and devout Hindus demanded, in unison, to pass an Act banning conversions in Maharashtra like other States. 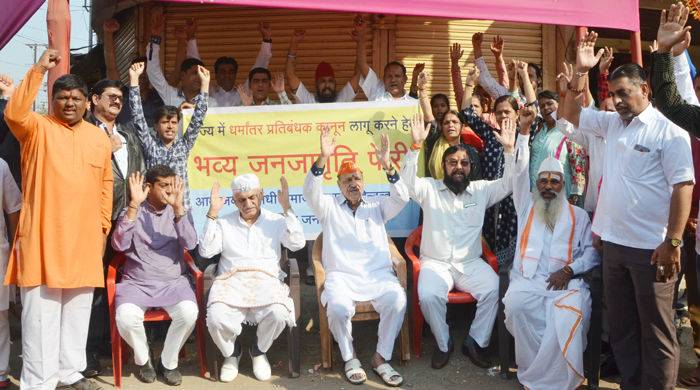 Demands made during march !

1. An Act should be passed in Maharashtra banning conversions !

2. Stringent action should be taken against conversions taking place in Ulhasnagar !

3. Inquiry should be conducted into funds received from abroad for conversions !

4. Inquiry should be conducted into incident of rape which had happened in church at Vitthalwadi !

5. Action should be taken against unauthorized prayer houses and prayer meetings !