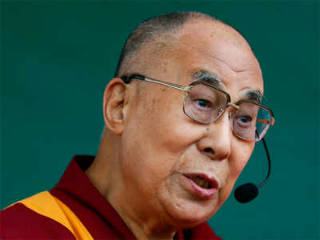 Farrukhabad : Tibetan spiritual leader the Dalai Lama on Tuesday said Muslim countries like Bangladesh, Pakistan and Syria should learn about religion from India so that there is peace in the world.

“There are various religions and traditions in India having population of over 125 crore. Muslim countries should learn from India. so that there is peace. There is coordination among all the religions here and due to non-violence principle, modern India is developing,” the Dalai Lama told reporters during a brief interaction here.

Asked about Doklam dispute, the spiritual guru only said, “Both the countries should sit and resolve the issue. The slogan of ‘Hindi-Chini bhai bhai’ should be relevant.”