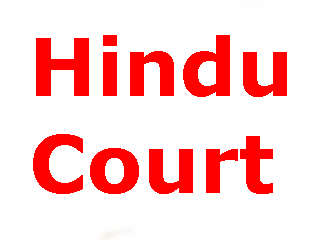 Meerut : Members of Akhil Bharatiya Hindu Mahasabha announced on Wednesday that it has set up the country’s first ‘Hindu court’, on the lines of Sharia courts. Set up with an aim to make decisions exclusively on Hindu affairs, and have an equivalent court-like system in place just like Darul Qaza (Sharia courts) — which resolves issues/disputes according to Islamic laws —the first Hindu court also got its first judge in a ceremony that was held at party’s office in Meerut.

“We had challenged the establishment of Sharia courts a few days ago because there should be one Constitution for all. We had told the government in a letter if our demands are not met, we will set up a similar court for Hindus. Since no action was taken in our favour, we set up the first Hindu court here,” said Pandit Ashok Sharma, the national vice-president of Akhil Bharatiya Hindu Mahasabha. Sharma is also the head of the five-member sangrakshak mandal of the Hindu court.

Members of the outfit plan to declare the bylaws of their court on October 2 and appoint a total of five judges in different parts of the country on November 15. Pooja Shakun Pandey, national secretary of Mahasabha, who has been appointed as the first judge of the Hindu court, said, “We will deal with matters related to Hindus only and the issues will range from harassment of Hindu women, Hindu marriages, disputes of property or money We will have proper jails and our maximum punishment will be death.”