A mother of two has returned to Hindu Dharma in a Ghar Wapsi program organized by Hindu Mahasabha at the Arya Samaj mandir in Aligarh’s Achal Taal area, Hindi news outlet UP Samachar has reported. The woman had married a jihadi man Shoaib, who had introduced himself as Kabir Chauhan, ten years ago.

The woman realized her husband was Muslim after she arrived at her in-laws place. At the time, she had consigned herself to her fate and continued with the marriage. But soon she began to be ill-treated. Her father-in-law and brother-in-law started eyeing her with wrong intentions. 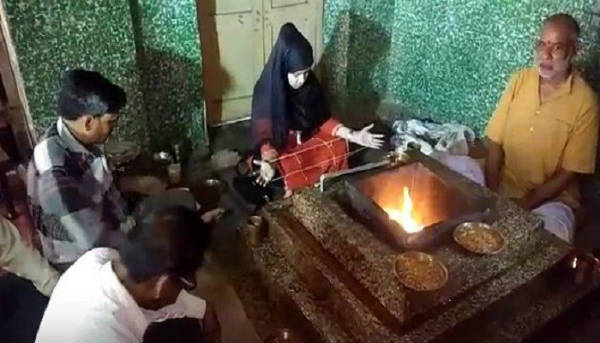 In between she gave birth to two children. Her father-in-law tried to rape her and brother-in-law raped her. When things became intolerable, she left the house.

Hindu Mahasabha’s Ashok Pande said that Hindu girls are trapped in such incidents of Love Jihad and married through deceit. Then their torture & exploitation starts. Today, we have done Ghar Wapsi of one such girl.