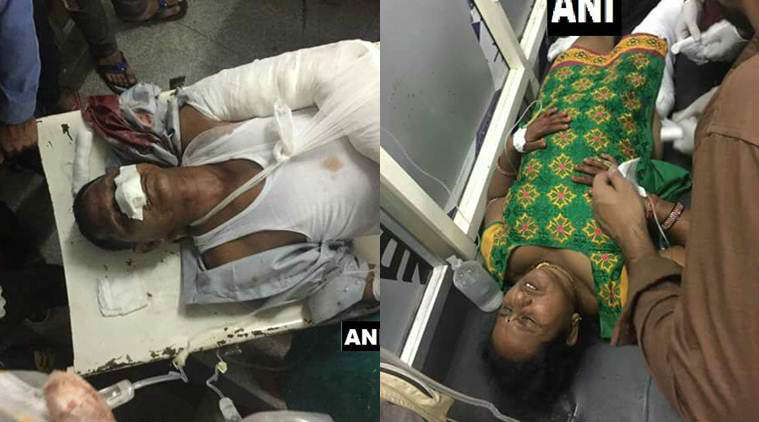 A seemingly innocuous phone conversation regarding the breakdown of a motorcycle, recorded by the J&K Police a day before the attack on Amarnath yatris in July last year, provided the first clue in cracking the case.

This was revealed by Superintendent of Police Tahir Ashraf, who led the Special Investigation Team (SIT) set up by the J&K Police to probe the attack.

On July 10 last year, a group of unidentified gunmen opened fire at a bus of Amarnath yatris at Botengoo, Anantnag on the Srinagar-Jammu highway, killing seven persons and injuring 20 others. The attack was unusual because militants hadn’t targeted the Amarnath yatra for over 15 years.

Last week, the J&K Police filed a chargesheet against 11 people, including a juvenile, in the case.

“When we began the investigation, it was a blind case. We started collecting evidence from the spot, spoke to survivors, especially the bus driver, but there was no lead,’’ recalled Ashraf. “We hadn’t heard any chatter and there was nothing that pointed to the identity of the attackers.”

He said his team then focused on “technical evidence”. “We found a cellphone tower close to the spot, and sought the tower dump (details of calls made through the tower) for the day of the attack. It was massive. We would have needed 500 people to analyse this data. So we decided to scan the data for a few hours only,’’ he said.

“Luckily, we found an ‘adverse number’ active around the spot. It belonged to Zahoor Ahmad Shaikh, 26, of Khudwani in Kulgam district. He was working as a driver with the State Road Transport Corporation and had been on our radar for some time. His number was under surveillance and his phone conversations were being recorded regularly. We sought his call detail records (CDR), and found that his location was close to the spot,” he said.

The phone records showed that Shaikh was in the area a day before the attack too. “We saw that he was in constant touch with Ajaz Ahmad Wagay, a resident of Posh Kreedi Srigufwara. Wagay, a medical representative, was not on our radar,’’ he said. “About 10 days after the attack, we got a major lead. Wagay had called up Shaikh a day before the attack and told him that neither Bilal nor Adil had arrived, so he would head home. Shaikh asked him to come and meet him, but Wagay told him that his motorcycle had broken down and he couldn’t go,” said Ashraf.

The SP said Shaikh was also in touch with the juvenile (suspected to be a part of the overground ring) and militants. “We were now convinced that Shaikh and Wagay were involved, but were unable to understand who Bilal and Adil were, and why Wagay would be waiting for them. Though there was one Bilal Reshi who was part of the group, Wagay wasn’t referring to him. Later, we came to know that the group had a set of code words which they used to communicate with each other while organising the attack. Bilal and Adil were codes for yatri bus and CRPF vehicle. So when Wagay spoke to Shaikh the evening before the attack, he was telling him that neither the yatri bus nor the CRPF convoy has passed Bijbehara. Wagay was at Bijbehara during his phone conversation with Shaikh,” he said.

“The group was using BBM, phone calls, voice notes and text messages to communicate with each other. But it was Shaikh’s calls that helped us crack the case,’’ he said.

Ashraf said after the attack, Shaikh, Wagay, the juvenile and Bilal Reshi switched off their phones. “This was another important clue because when we checked, these phones had never been switched off before,” he said. “We were able to find a group of seven local overground workers who had formed a ring to help four militants. Except Shaikh, the other six were not on our radar.”

He said that among the four militants who carried out the attack, one was a local militant, Yawar Bashir Wani of Devsar. The other militants, he said, were Abu Ismail, Maaviya and Furqan, all Pakistani nationals. “Shaikh had been friends with Wani, and that’s how he got involved with this group. Bilal Reshi had joined after his brother was killed in an encounter. Wagay was his friend,’’ he said.

Deputy Inspector General of Police, South Kashmir, S P Pani told The Indian Express that the militants had formed a new group of overground workers for this attack. “Other than Shaikh, the rest of the group had been freshly recruited,’’ he said. “The juvenile had been roped in because he had a car which was used to ferry militants,” he said.

Pani said after the case was cracked, a clear picture emerged. “The meeting to organise the attack had taken place in the house of Bilal Reshi, at Bijbehara. He is a shopkeeper but his brother was a militant who was killed in January last year,’’ he said.

He said that Shaikh coordinated the attack. “They had been doing the recce for two three days. They first planned to carry out the attack a few hundred metres ahead, but then changed their plan at the last minute,’’ he said. “Abu Ismail (of Lashkar-e-Toiba) had asked for two vehicles too. One of the vehicles was provided by the juvenile,” he said.

After the attack, according to the police, another group of overground workers was waiting with a car to ferry the militants away. “They even changed their vehicle to avoid detection, before heading towards Pulwama,’’ said Ashraf.

“All the militants involved in the attack have been killed in encounters. Three overground workers (Shaikh, Wagay and Bilal Reshi) who helped the militants are in judicial custody. The juvenile was released on bail. Three of the accused are absconding,” he said. The first arrest, according to Ashraf, was Wagay. “We had informed (police in) Kulgam district, who picked him up,’’ he said.

The three absconding accused are Khalid Muzaffar Dar, 20, Tanveer Ahmad Dar, 20, Sarjeel Ahmad Sheikh, 20, all residents of Khudwani. “We are looking for them,’’ said SP Ashraf.