Portrait removed after warning by police ! 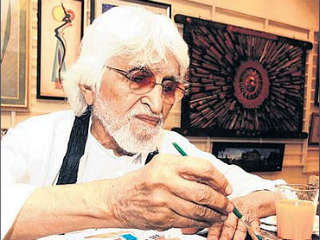 Kochi : Students of Shri Kerala Varma College decided to welcome all new students taking admission in the college this year. They had displayed picture of a vulgar portrait of Goddess Saraswati drawn by M F Husain. Assistant Professor Deepa Nishant had taken initiative in this context; therefore, many people criticized her on social website. Deepa Nishant had extended help earlier even in celebration of ‘beef-party’. (What kind of ‘sanskars’ will be inculcated amongst students with such kind of teachers in such colleges ? – Editor, Dainik Sanatan Prabhat)

Students brought it to the notice of police when they warned the College that case would be filed against the College if such posters were not removed. Later, those posters were removed. Police, however, said that they got the information through social websites; therefore, they went to the College but there was no work by M F Husain on display; therefore, case was not filed against any students. (Craftiness of Kerala police to save students ! Will any action be ever taken against Hindu-haters in a State ruled by communists ? – Editor, Dainik Sanatan Prabhat)