Now Central Govt should immediately arrest anti-national Azam Khan for such insult of our Indian Army. How Azam Khan can dare to make such statements about our soldiers ? Why secularists and leftist liberals are mum on such statement by Azam Khan ? – Editor, Hindujagruti 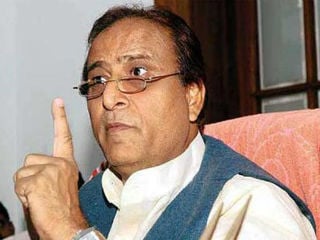 In a shocking remark, Samajwadi Party leader Azam Khan today said the excesses of the Army in Jammu and Kashmir and other sensitive areas forced women to chop off the private parts of soldiers in revenge.

“Soldiers have been beaten by women in Kashmir, Jharkhand and Assam and their private parts were also chopped off… India’s truth is that women are forced to act against Army rapists. It is a message that Hindustan should be ashamed of,” Khan, notorious for his controversial remarks, said at an event in his bastion Rampur in western Uttar Pradesh.

“India is deviating from its path after six decades and is adopting the path of bullet instead of ballot and the result is there for everybody to see,” the former Uttar Pradesh minister said.

Last month, Khan had asked people to keep womenfolk indoors to protect them from molesters. The statement had come in the backdrop of molestation and groping of two women by over a dozen youths in Rampur.

A video clip that went viral on social media showed the youths accosting two women, groping and molesting them while they repeatedly pleaded and begged to let go.

“After the Bulandshahr incident, everyone should try to keep women of the family indoors. Girls should not go to places where there is naked dance of shamelessness,” said Azam Khan while referring to the July 2016 gang rape of a minor and her mother in Bulandshahr.

Khan has a penchant for making controversial statements. He was made to apologise by the Supreme Court for calling the Bulandshahr case a “political conspiracy”.