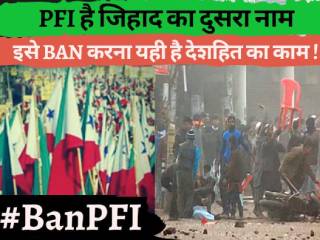 There have been violent protests against Citizenship Amendment Act all over the country including at Delhi, Uttar Pradesh, Bengal and Assam. Protesters are resorting to stone-pelting, arson, damaging public properties, brutal attacks on police, using petrol bombs etc on large scale. Common man is therefore, naturally wondering as to why there should be so much violence and that too in systematic manner, for the Bill that has been passed in Parliament and who are behind such violence. Answers to these questions are slowly coming forth. Intelligence Department has submitted a report to Home Ministry about involvement of banned fanatics’ organization viz. ‘Islamic Students’ Movement of India (SIMI)’ and ‘Popular Front of India (PFI)’ which is active in southern parts of India. Ban has been imposed on SIMI for the last few years; but its roots are still found all over the country including Marathwada in Maharashtra. It shows that roots of fanatics’ anti-national organizations should be uprooted on permanent basis while imposing ban on them and that is what the present Government is trying to do. Now the issue regarding PFI still remains ! PFI is an organization which is clandestinely associated with Communist Party of India (Marxists). Anti-national activities of PFI are increasing since past few years and there is need to put curb on them in systematic manner. Need for having control over PFI would be clear from the violence created by fanatics against Citizenship Amendment Act.

SIMI has started restructuring this organization after Union Government imposed ban on them. It has started coming together for its anti-national activities under the banner of PFI which is active in southern parts of India. It is said that PFI has assured support to SIMI. Recently, a news channel had carried out ‘sting’ operation of PFI. It was realized during that operation from anti-national activities of PFI that it had plans to convert Hindus on large scale and make India (and consequently the world) as an Islamic country. This task is being speedily done by PFI’s organization named ‘Satyasarini’. ‘Satyasarini’ has converted thousands of Hindus so far either by force or through baits. Though they have officially declared converting 5000 Hindus so far, the actual number could be much more. When a person is sent to this organization, he is given guidance or ‘brain-washed’ and shown video-clips of incidents of so-called oppression of Muslims. National Investigating Agency (NIA) has found about activities of ‘Satyasarini’ and PFI while investing the case of ‘love jihad’ related to a girl named Hadia in Kerala. These aggrieved persons were sent for two months training on religion, to ‘Satyasarini Islamic Adhyayan Centre’. NIA investigated 11 cases of ‘love jihad’ when in 9 cases, part of ‘Satyasarini’ organization known as ‘Marakaz Hidaya Dawa Institute’ was involved. It was observed that they were sent for two-month training program at ‘Satyasarini Islamic Adhyayan Centre’. Among the 3 issues investigated by NIA related to ‘love jihad’ in Kerala, 13 persons have been taken into custody who are all either activists or supporters of PFI. Here, one may think from where they got money for such activities. It was found during NIA-investigations that they were provided funds by gulf countries.

Ban has to be imposed on PFI !

PFI’s fanatics have killed 15 activists of RSS in Karnataka and 17 RSS activists in Kerala during last few years. NIA had claimed that PFI was involved even in murder of Rudresh of RSS from Bengaluru. No action has been taken by either Karnataka police or Kerala police against absconding accused in those murder cases. Moreover, the Communist Government in Kerala and the then Congress Government of Karnataka have always assured safe haven to the accused. In few cases in Karnataka, police carried out some arrests just to show that action was being taken under a stringent Act like ‘Unlawful Activities (Prevention) Act (UAPA)’; but the relevant clause was surprisingly excluded while filing charge sheet against them; therefore, all accused were granted bail by the Court. It shows double-standard of Congress Rulers and it is dangerous for the security of this country. It also shows anti-nationalism of Congress Party. Jharkhand Government has filed a case against PFI for ‘money-laundering’ on the basis of financing terrorist activities. Jharkhand Government has imposed ban on PFI under ‘Criminal law Amendment Act’. Participation of SIMI and PFI in the current incidents of violence is quite worrisome. The facts of the situation should be brought forth before people by media; but they are keeping mum over activities of PFI and politics played behind the scene. Union Home Ministry needs to just impose ban on PFI, considering its involvement in anti-national activities !

On this #RepublicDay2020, we urge @PMOIndia led by Hon PM @narendramodi ji and @HMOIndia led by Hon @AmitShah ji to ban organisations like PFI, that are spreading violence across the country !#BanPFI to make India Safe !

Jharkhand has already banned it & now UP Govt led by @myogiadityanath has also demanded the same.

Recently Uttar Pradesh police had written to the Union ministry of home affairs asking it to ban the Popular Front of India (PFI) after it arrested 25 members of the outfit for their alleged involvement in propagating riots across the state against the amended citizenship law, UP DGP OP Singh told ET.

On the day the Uttar Pradesh government asked the central government to ban Islamist organisation Popular Front of India (PFI), Union law minister Ravi Shankar Prasad said PFI may have played a part in violence surrounding some protests against the Citizenship (Amendment) Act (CAA) and that the Union home ministry will decide on the action to be taken against the organisation “based on evidence”.

In relation to these developments and scars of violent of anti-CAA protests, nationalists on Twitter demanded immediate ban of PFI using hashtag #BanPFI

UP, Karnataka and Assam seeks ban on PFI for Anti-CAA violence

Assam finance minister Himanta Biswa Sarma said that government will write to centre to ban Popular Front of India (PFI) as outlawed organisation. Assam police is investigating the role of PFI in the anti Citizenship Amendment Act (CAA) violent protest on December 10 and 11.

Earlier Sarma has alleged role of PFI and students wing – the Campus Front of India (CFI) for violence outside state Secretariat. “Ever since we crackdown on PFI violent protest ceased. Our police have got electronic evidences of PFI involvement and we have given it to the Central Forensic Laboratory in Guwahati for analysis.” He added, “PFI claims that it’s a democratic organisation however the people in this organization talk in code language. We have evidences that they were using codes. This is very doubtful. Experts are trying to decode the language.”

He further added that once the forensic report of the electronic evidences is received and if there is something incriminating government will immediately urge for banning the organisation. Earlier PFI’s state President Aminul Islam and publicity incharge Mohhamad Muzamil Haque were arrested in connection with a case in Rangia.

UP seeks ban on PFI for Anti-CAA violence

As per ET report, Uttar Pradesh police has written to the Union ministry of home affairs asking it to ban the Popular Front of India (PFI) after it arrested 25 members of the outfit for their alleged involvement in propagating riots across the state against the amended citizenship law, UP DGP OP Singh told ET.

“We are writing to the government of India asking it to ban the outfit,” Singh said in a response to ET’s query.

Last week, the state police arrested three members of the organisation from Lucknow, including the state head of the outfit Wasim, 18 from Shamli and 4 from Meerut.

The police had found materials such as banners, flags and pamphlets. According to the police, the strategy was to call a large number of people for the protests for which groups were made on social media websites and photos and videos were shared to incite people against the CAA as well as the NRC.

“It was especially, the Popular Front of India (PFI) which was behind all the damage done to property, arson and anarchy in state. Such organisations will not be allowed to flourish, they will be banned,” a new agency has reported deputy CM of UP Keshav Prasad Maurya as saying.

On the day the Uttar Pradesh government asked the central government to ban Islamist organisation Popular Front of India (PFI), Union law minister Ravi Shankar Prasad said PFI may have played a part in violence surrounding some protests against the Citizenship (Amendment) Act (CAA) and that the Union home ministry will decide on the action to be taken against the organisation “based on evidence”. 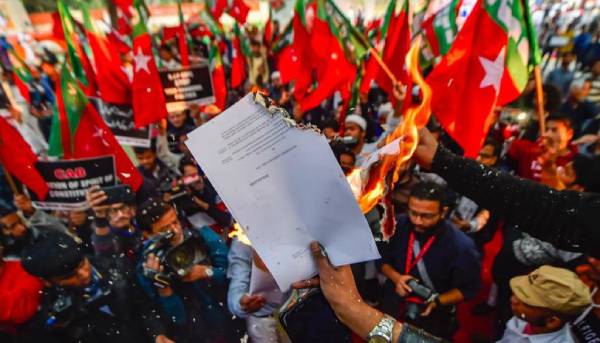 Links of Popular Front of India (PFI) and Social Democratic Party of India (SDPI) activists have emerged to the violence that broke out in Mangaluru on December 19, and sources have told Republic TV that the Mangaluru police are closely looking at the role of the Kerala unit of both these organizations. As per sources in the Mangaluru police, from spreading misinformation by forwarding texts to inflame students to the planning of violence even when section 144 was imposed, the planning and execution were allegedly led by Kerala wing of PFI and SDPI.

BJP demands ban on these outfits

The BJP has renewed its demand for a ban on both the organisations with state president Nalin Kumar Kateel taking the lead. Kateel recently commented that there is a clear role of PFI in the rampage. Kateel said that “normal, ordinary” protesters do not plan a “Kashmir-style attack” on our forces and that the attack captured in CCTV footage should be treated as evidence of deliberate incitement of the police.

Other recent anti-national activities of PFI