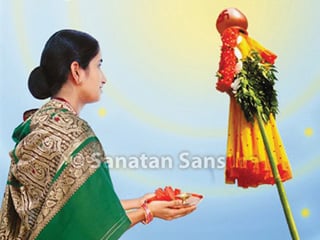 Celebrations on the eve of the Western New Year, that is 1st January, is accepted by Hindus as a day of celebration for them as well. They make big plans for this day, with regards to shopping, eating at a restaurant, taking a vacation, etc. And mind you this is not only in big cities, it is also happening in villages, which do not even have the basic amenities of regular electricity and water supply ! By aping the West you are not only destroying your own tradition but are also impressing materialistic values upon the future generation. Hindus are completely in the dark about this fact. This article is therefore meant to highlight these facts.

Difference between 31 st Dec and

Hindus, learn from Muslims how to be proud of Dharma !

Do those, exchanging New Year greetings on 1st January, wish each other on ‘Gudhi Padva’ ?

We have been coming across ‘flex’ boards displayed at every nook and corner and crowded places which are sponsored by the rulers and other eminent personalities extending New Year greetings on 1st January. Also nowadays, we see such boards with best wishes even on the occasion of ‘Hizri’, New Year of Muslims. Do those, who exchange greetings on the occasion of New Year of Muslims and Christians wish Hindus on ‘Gudhi Padva’ ?

‘Conversion’ for a day !

When a person converts to a new religion he begins to follow the customs and celebrates festivals of that religion. In the same way, in neglecting our own customs if we Hindus start celebrating Christmas or New Year as per the Christian calendar, then even if it be for a day we too are like converts to Christianity ! Hindus are completely oblivious to the fact that they will have to face the demerits of neglecting their own rituals and of being anti-Hindu, for following the materialistic ‘Western days of celebration’. Today, to create respect for their religion and Dharma amongst Hindus, religious education is an absolute necessity.

Parents of the materialistic new generation are in hibernation !

As per the Hindu religion every auspicious event begins with ritualistic worship at the auspicious time (Brahma muhurta), which is on awakening at dawn, after a bath, wearing clean attire and ornaments. As a result, the sattva component in the atmosphere creates good impressions on the doer.

On the eve of the Western New Year people drink and make merry, in other words spend the night enjoying the pleasures of life. Thus automatically impressions of materialism are created on their subconscious minds. Besides, since at night the atmosphere is tama predominant the tama component in them grows. People are unaware of this because of the lack of religious education; the young generation falls prey to this materialism, fun and frolic. Their parents too are completely oblivious about what is happening to their children.

Today the Hindu religion is being attacked on all fronts, influence by Western culture being the most invasive. It is the duty of each and every Hindu to combat this attack. Just as on the day of Gudhi Padva Lord Rama killed the demon Ravan and returned to Ayodhya to hoist the flag of victory, so also Hindus must now combat Ravan who has assumed the form of Western cultural invasion and raise the Gudhi this year !

Hindus! Live as a true Hindu at least for a day!

On this day one can take note of the ‘do’s’ and don’ts’ given below –
1. Do not wish a fellow Hindu ‘Happy New Year’ either on 31st December or 1st January.

2. If a fellow Hindu greets you that way, take time to explain to him how this is wrong and impress upon him that Chaitra Shukla Pratipada is actually our new year.

3. Instead of sending New Year greetings to relatives and friends for 1st January, do it on Chaitra Shukla Pratipada.

4. Ensure that you pass on this valuable information to your near and dear ones, thus preventing them from sinning by celebrating New Year on a day other than our real New Year.

5. Remember that ushering in the New Year on Chaitra Shukla Pratipada will help you develop pride in your religion, nation and language.

A flyer creating awareness about the disadvantages of New Year celebrations on 1 st Jan. One HJS visitor sent this to us.

“When I read the Bhagavad-Gita and reflected about how God created this universe everything else seems so superfluous.” – Albert Einstein

Albert Einstein’s quote is very significant for everyone, especially, Hindus. He was neither born a Hindu nor did he practice Hinduism; still he could understand the essence of Hindu Dharma. Like him, there are many other famous people who have realized that Hindu Dharma offers much more than any other religion.

In contrast, Sages from Hindu Dharma have studied the creation of universe deeply and with their Divine abilities, they have precisely identified the day when the universe was created. They have also calculated the total time span that has passed by, and when the complete dissolution of universe will occur.

Therefore, as a follower of Hindu Dharma, celebrating December 31 and January 1 as New Year’s Eve and New Year Day respectively is like celebrating a birthday on any random day than on the correct birth day.

Hindu Janajagruti Samiti urges all Hindus not to celebrate New Year’s Eve on December 31 and New Year Day on January 1; because it is not only incorrect but it has a spiritually harmful impact on people and the environment.
Be proud of your Hindu Dharma; celebrate New Year on Chaitra Shukla Pratipada, when this universe was actually created.