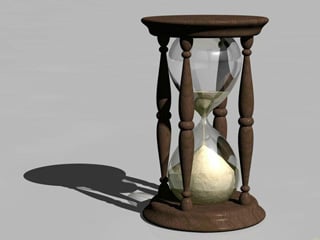 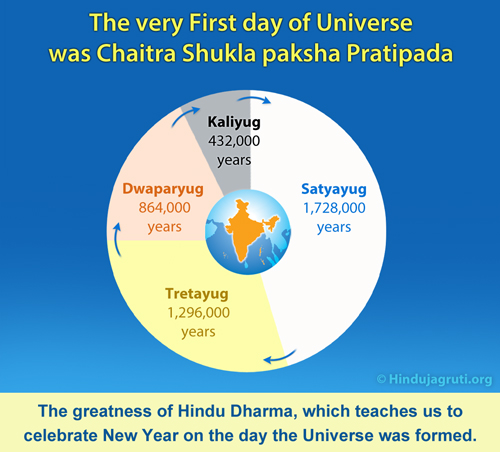 Creation of the Universe

In a Hindu Scripture, the ‘Chandogyupanishad’, it is said that the Supreme God (Parameshwar) made a sankalpa (resolve) ‘I am one, I will manifest in several forms’, and the Universe was created.

The creation of the Universe happened on the Hindu Calendar Date (tithi) of Chaitra Shukla Pratipada. Thus, the Hindu calendar begins on the sunrise of this tithi. This date usually falls on any day from late March to mid-April on the Gregorian calendar.

Time span of the creation of the Universe

The time span has been divided into thousands of years, called as Yugas. There are four Yugas in total.

The total number of years of all these four Yugas is known as a Mahayuga.

1 kalpa (One Day of Deity Brahma)

1 kalpa (One Night of Deity Brahma)

At the end of each kalpa, the Bhulok  (Earth region), Bhuvarloka (Nether plane) and Swargaloka (Heaven) are dissolved and new creation begins.

The lifespan of Deity Brahma is 100 years

A. Right now, the first day of the 51st year (Shwetavaraha Kalpa) is going on.

B. Manvantars of this kalpa have been completed while the 7th (Vaivasvat) is taking place.

D. The first part of kaliyuga comprising 5116 years has passed and this Gudipadwa / Yugadi will signal the start of the 5117th year.