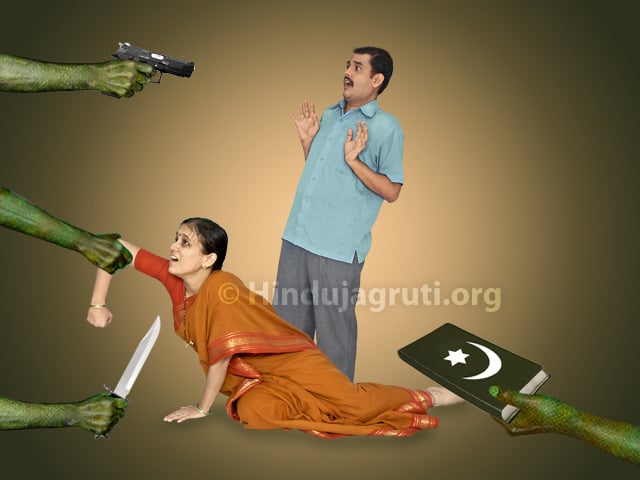 Like the Christian missionaries, the Islamic preachers also resort to various tactics for religious conversions of Hindus. Illustrations of these tactics are given ahead through examples, incidents or experiences.

1A. Free distribution of books on Islam

A Jihadi group, ‘Darur Quran al Sudana’, has translated books on Quran and Islamic philosophy into Marathi, Gujarati, Hindi and English, and made these available at railway stations in Mumbai free to Hindus.

1B. Organisation of a programme for everyone titled as ‘Prophet Muhammad’

‘On 30.3.2008, an organisation called ‘Jamaat-e-Islami Hind’ organised a programme called ‘Prophet
Muhammad for everyone’ at Kalyan (District Thane, Maharashtra). The pamphlet for this programme used words such as ‘Prophet’, ‘humanity’, ‘teachings’, ‘peaceful co-existence’ etc. as are used by Christian missionaries.’

2A. Enumerating similarities between the religious principles of Hindu Dharma and Islam

A. Free distribution of a compact disc enumerating similarities in the teachings of Saint Tukaram and Prophet Muhammad.

2B. Distribution of pamphlets and books criticising Hindu Dharma

A. A booklet ‘Suno apne rab ki’ (Listen to your God)’ propagating Islam, is being distributed free to Hindus. In this booklet, Idol worship and Idols are termed as ‘fuel for passage to Hell’.

B. A handbill ‘Jara socho to’ (Just ponder over this), which is distributed door-to-door in Hindu localities contains despicable criticism of Hindu Deities, Idol worship etc. and suggests that
Hindus should embrace Islam.

Dr Zakir Naik and Dr Shoaib Sayyad of ‘Islam and Comparative religion’ organise programmes where they try to prove that Islam and Hindu Dharma are similar. Some aspects of their discourses are, They keep repeating that ‘Shrikrushna has taught jihad to Arjun through Shrimadbhagwadgita’.

‘Through YouTube, Islam is being propagated with the help of two bogus Shankaracharyas. One tries to convince people about the truth in Islamic principles, while the other speaks on why he converted to Islam.’

The declared objective of the 6th Convention of ‘All India Jamaat-e-Islami’ at Hyderabad in 1981, was to increase the Fanatic population in Bharat to 20 crore over the next decade by converting Dalits in large numbers. A promise of the required finance from Arab countries to fulfil this objective was made during
this Convention.

3A. An example of converting the Hindus through enticements along with the use of force

‘Mr Balu Sandu Maid of Sillod, District Sambhajinagar, Maharashtra, filed a complaint with the local Police station of how two of his brothers had been converted to Islam by Jihadis, initially through enticements, and later with threats.

3B. Religious conversion of hundreds of Hindus at Meenakshipuram and Kurayur through enticement

In 1981, Jihadi organisations enticed hundreds of Dalit Hindus from Meenakshipuram and Kurayur (a village 40 kilometres from Madurai in Tamil Nadu) to embrace Islam.

‘Love Jihad’ is an Islamic campaign to deceive Hindu girls and married women into love with Jihadis, and later compel them to accept Islam. This has been going on everywhere in Bharat over the past 15 years. (Click here to read more)

‘To convert young Hindu men to Islam, Fanatic women pretend to fall in love with them. Once trapped in love, the Hindu is compelled by the Fanatic woman or her family to convert to Islam.

Using the vashikaran (Black magic done so as to entice and control a person) technique, Jihadis are carrying out widespread religious conversions of Hindu girls.

(Note : ‘Vashikaran is a tantrik vidya [A technique to appease negative energies as part of their spiritual practice] in which, with the help of mantra, yantra, bhasma & various types of medicines, one individual can control the actions of another individual.)

5A. Conversion of a young Hindu woman by a Fanatic mantrik,

‘A 22-year-old woman from a Hindu family in a village of Ratnagiri (Maharashtra) was suffering from distress such as feeling of numbness in the head, pain in the shoulder and neck etc. Since the medical examination did not reveal any illness, her family members took her to a Fanatic mantrik (Age 50-55 years) who treated through herbal medicines. He wrote some Urdu mantras in Marathi language for her convenience and advised her to recite them every day. Similarly, he advised her to offer namaz in the house. She complied with his instructions. Due to this treatment, she got some relief from her distress. In this period, the mantrik took her to a dargah at Karoshi in the Karnataka State a couple of times. The mantrik gave her an amulet to wear around the neck, and 2 flowers of sonchafa (Michelia champaca) entwined with red thread to keep in her bag. When she carried these objects with her, she started feeling that she should not live in her house; she should not even meet her parents and brother. Oneday, she eloped with that mantrik. While leaving her home, she left a note – ‘I am going to the dargah in Karoshi. This is the only way to cure my illness’. The mantrik took her to a Muslim advocate where an affidavit was made that she was converting to Islam. In this way, the Hindu woman came under the complete control of that mantrik.

Later, her family fought back with the help of Hindus who had united on this issue, and the girl was brought back to her parents. Later, when her horoscope was shown to one astrologer, he opined that she had been subjected to vashikaran. After performing the ritual to remove the effects of vashikaran, the young girl returned to her normal self. She threw away the amulet and the flowers given by the mantrik. Now she claims, ‘I do not know how I left my home, where I went. With God’s grace, I am out of this terrifying experience’. – Mr Sanjay Joshi, Hindu Janajagruti Samiti, Ratnagiri, Maharashtra. (2011)

‘The tactic of converting Hindus in jails is going uninterruptedly since the last century. In Arthur Road Jail of Mumbai, Hindu prisoners are enticed in various ways and are forced to convert. After release from the jail, they are sent to madarasa and trained for jihad. In 2006, around 20-25 Hindu prisoners from Arthur Road Jail converted to Islam. (Daily ‘Samana’ [30.7.2006])

6A. Need to unitedly prevent religious conversions in jails

7A. The forcible religious conversion of a Hindu, followed by his assassination

‘In Davangere, Karnataka, a Hindu youth, Mr Chandrashekhar fell in love with a Muslim girl. In July 2011, the Muslims put a condition that he could marry the Muslim girl only if he converted to Islam. Mr Chandrashekhar accepted this and converted to Islam. He also gave his consent on a stamp paper. Despite this, the Muslims did not allow him to marry the girl; they assaulted him, and later, poisoned him to death.’

‘Even though Hindus gave Pakistan to Muslims, they are still unsatisfied. They want to turn entire Bharat into an Islamic country, and hence, have resorted to terrorism to achieve this objective.’ – Mr Arvind Kulkarni, Senior Journalist, Mumbai, Maharashtra.

8A. Forcible religious conversion of Hindus in Kashmir