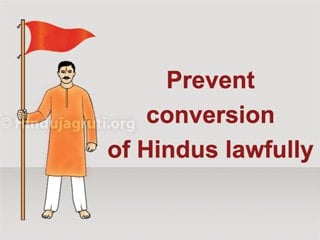 Conversions are an anti-social, anti-national and anti religious act; hence, Hindus everywhere should unitedly fight it legally. This can be done in the following ways.

1. Alert Hindus about becoming victims of the tactics of non- Hindu campaigners !

3. As soon as you learn that a non-Hindu preacher has entered your territory, closely observe his moves on conversions. If he tries to convert Hindus, then unitedly admonish him.

5. Non-Hindus organise programmes such as ‘prayer meetings’, ‘healing meets’, ‘Know Islam’ etc. with the intention of converting Hindus at various places. If there is a risk of conversions taking place there, then they should be opposed by lodging Police complaints, agitating lawfully etc.

6. Identify the geographical areas and castes that have a higher rate of religious conversions. Go to such areas as full-time or as part-time volunteers for bringing about awakening on Dharma !

7. Do not donate to social service organisations, schools, hospitals etc. of Christians !

8. Give a joint memorandum to the people’s representative in your area demanding a law to ban conversions and follow up this matter !

Article 25 of the Bharatiya Constitution and conversions

1. Article 25 of the Bharatiya Constitution

This is titled ‘Freedom of conscience and free profession, practice and propagation of religion’.

other country in the world – the right to propagate religion, which is favourable for Christians

3. Christians have misinterpreted the word

‘propagate’, and argue that ‘conversions are a constitutional right’

On Page 117 of ‘Introduction to the Constitution of India’ by Dr. Durga Das Basu, his views on ‘operation (propagation)’ and ‘conversion’ have been provided. He says, ‘Christian leaders argue that they have unlimited constitutional rights to convert people through means other than words. However, this presumption is absolutely incorrect.’ – Prof. SM Golvalkar (43)

4. ‘As per one Supreme Court order, Article 25 (1) of the Constitution

‘In 1997, Madhya Pradesh Government enacted a law against conversions. Rev. Stanislaus fi led a petition against this in the Supreme Court. The Constitution Bench of the Supreme Court headed by Chief Justice AN Ray interpreted the word ‘propagate’ used in Article 25 (1) of the Constitution as – “to spread from person to person, or from place to place, to disseminate, diffuse (a statement, belief, practice etc.)” and – “to transmit or spread from person to person or from place to place; carry forward or onward; diffuse; extend; as ‘propagate’ a report; ‘propagate’ the Christian religion”. The Bench observed : “We have no doubt that it is in this sense that the word `propagate’ has been used in Article 25 (1), for what the Article grants is not the right to convert another person to one’s own religion, but to transmit or spread one’s religion by an exposition of its tenets”.

Referring to Article 25 (1), Chief Justice Ray, writing for the Court, held : What the Article grants is not the right to convert another person to one’s own religion, but to transmit or spread one’s religion by an exposition of its tenets. It has to be remembered that Article 25 (1) guarantees a freedom of conscious to every citizen, and not merely to the followers of one particular religion and that, in turn, postulates that there is no fundamental right to convert another person to one’s own religion because if a person purposely undertakes the conversion of another person to his religion, as distinguished from his effort to transmitor spread the tenets of his religion,  that would impinge on the “freedom of conscience” guaranteed to all the citizens of the country alike’.  ‘Every individual is free to convert to another religion but doing this through mental brainwashing or deceit is unethical. If full permission for conversions is granted then every religion will begin its campaign of preaching and all will try to convert by unfair means. The court at that time stated that the State Government will have full powers to punish individuals who support such wrong practices and are party to performing them.’