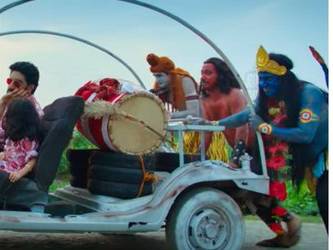 Hindus expect the Central Government to pass a law as early as possible so that stringent action can be taken against those who are in the habit of constantly making a mockery of and denigrating Hindus’ seats of worship, faith, customs, and traditions, etc.

New Delhi : Officers of various companies and producers and directors of films and web series seem to have taken a vow to hurt the religious sentiments of Hindus. In a series titled ‘A suitable boy’, a Muslim boy is shown kissing a Hindu girl in a temple premises; while in ‘Ludo’, a movie released on Netflix, there is a denigration of Hindu Deities by showing them in the form of different impressionists.

In Amir Khan’s film titled ‘PK’ released a few years ago, there was the denigration of Hindu Deities by portraying them in disgraceful forms. In the movie, ‘Ludo’ directed by Anurag Basu, a similar attempt has been made.

Hon. @MIB_India, while we appreciate your recent order to censor digital platforms including OTT platforms, we urge you to expedite the implementation of the order as insult of Hindu Dharma, Deities and India going on. #Hinduphobic_AnuragBasu

Why do such film directors always hurt d religious sentiments of Hindus?

At the end of d day, Hindus end up watching these movies

1. In one scene in this film, there are 3 persons in weird attire and they are shown as Brahma, Vishnu, and Mahesh, dancing on the road and jumping while the actor Aditya Roy Kapur is looking at them with contempt.

2. In another scene, two persons as Bhagavan Shankar and Devi Mahakali are shown pushing a vehicle.

3. In another scene, the actor and actress are shown lying in bed when they receive a call from her mother. When the mother asks their whereabouts, they tell her that they are in a temple.

4. There are also jokes about ‘Ram-Leela’ and cows in the film.

5. In one scene, director Anurag Basu and actor Rahul Bagga are playing ludo. Anurag Basu says to Rahul Bagga, “So many people died due to Corona. Do you think they all were sinners?” Basu explains to Bagga about the concept of merits and demerits, “After the Mahabharata war was over, when Pandava go to heaven, they see Duryodhana already sitting there.” Basu says, “The whole world considered Duryodhana as a sinner.” Thus, attempts are made to show Kauravas as heroes and Pandavas as the villain. It is also shown that Anurag Basu is telling some fabricated fictitious story.

#Hinduphobic_AnuragBasu trends as Hindus speak out against maker of Hinduphobic ‘Ludo’

Recently Netflix released Anurag Basu’s LUDO during Diwali. If we go back a few years, Amir Khan’s PK movie had grossly denigrated Hindu Gods and Goddesses in the most filthy way. LUDO directed by Anurag Basu has decided to continue that trend. This mockery of Hindu Deities is an affront to Hindu religious beliefs.

Hindu netizens took to Twitter to vent their hurt sentiments and started tweeting with hashtag #Hinduphobic_AnuragBasu. More than 23,000 tweets were tweeted using the said hashtag and it became one of the top national trends on Twitter in India. For few hours, it was on 4th spot in top 10 trends.