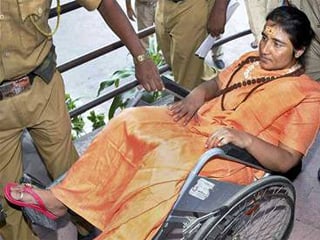 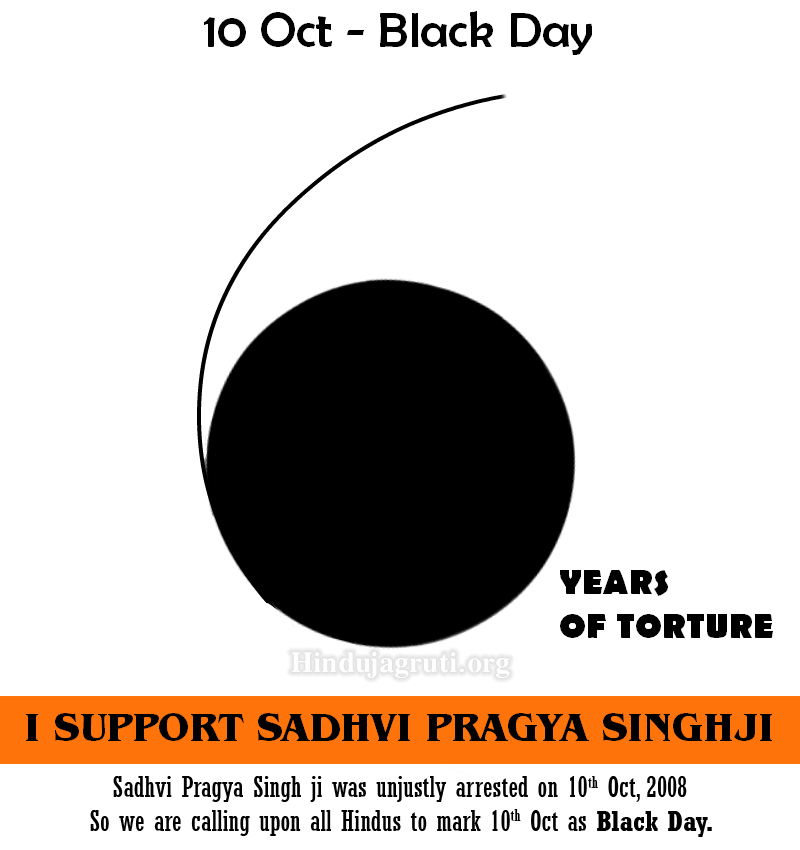 Sadhvi Pragya Singh is in jail for the past 6 years (arrested unofficially on 10th Oct. 2008) without any case, to plot ‘Hindu terrorism’..

In these six years the investigating agencies have not managed to pull together even one page of proof against Sadhvi Pragya Singh. If that is not reason enough, Sadhvi Pragya ji is suffering from Cancer. We have numerous examples of people convicted of serious charges being out on bail, but then why does Sadhvi Pragya ji continue to be behind bars? It is now time that all Hindus unite and send a strong message to the Government that harassment of Sadhvi ji will not be allowed.

What we can do to Support Sadhvi Pragya Ji !

It is very shameful for Hindus that Sadhvi Pradnya Singh Thakur is being brutally tortured under Congress regime. Why are media and people from Human Rights Commission keeping quiet on this issue ? Congress Government and police torturing Sadhvi for 6 years, make ‘Dharma-kranti’ imperative! Will any maulavi or missionary be kept languishing in prison like her ?

Sadhvi Pradnya Singh was arrested unjustly for the so-called charges of her involvement in 2008 bomb blasts in Malegaon. Six years have been completed on 10th October to that incident. During these 6 years, anti-terrorist squad, national investigating agencies and Maharashtra police inhumanly tortured Sadhvi.  People like Abdul Nassir Madani, who make anti-national statements, are released from prison; terrorists creating havoc in Kashmir are also released ; but Sadhvi Pradnya Singh and Col. Prasad Purohit are still brutally tortured in jail. Pro-Hindu organizations will be observing 10th October as ‘Black day’ to condemn this injustice and torture. A movement has been undertaken through many social websites by posting photographs to remind people about the bitter torment. Shiv Sena and Hindu Janajagruti Samiti are jointly observing ‘Black Day’ in Andhra Pradesh.

This is the way in which Sadhvi Pradnya Singh is being tortured !

4. Made to go through ‘narco’ and ‘truth finding’ tests constantly !

5. Ban to even get treatment on various ailments suffered by her !

7. Sadhvi, although suffering from cancer, not allowed to get Ayurvedic medicines; unpardonable negligence even in taking her to hospital !

8. Not allowed to go even for taking last ‘darshan’ of her father on his demise !

Fight given by Sadhvi !

Time and again, Sadhvi filed complaints in Court against police. In February 2012, she wrote 15-pages letter to the President narrating her distress; gave up food by way of protest; but it had no effect on the ruthless rulers, who are descendants of Mughals !

Why the same Rajnath Singh is keeping mum after becoming Central Home Minister ?

In November 2008, the then President of BJP and the present Central Home Minister had made a statement about Sadhvi Pradnya Singh being given such treatment by ATS and Maharashtra police in the name of inquiry, which is not given to even any terrorist. (Ref: Maharashtra Times, 8.11.2008)

2. Sanjay Dutt is let out on parole every now and then, why is there one law for him and different law for Sadhvi Pradnya Singh and Col. Purohit who fought against terrorists ? We will not tolerate any injustice against Hindu Saints ! (Dombivali rally, 23.2.2014)

3. Sanatan seekers were acquitted in Margao blast case; but before that, they had to go through an ordeal like raids by police; series of inquiries, torture et al. One day, even Sadhvi Pradnya Singh and Col. Purohit will be acquitted in Malegaon blast case. Of course, such ordeal has become a habit for Hindus; however, the political leaders and police officers, who torture innocent Hindus by accusing them as terrorists, will have to face destruction and we have experienced the same even earlier. There is power in spiritual practice of 80 crores Hindus. (Editorial- Dainik ‘Saamnaa’, 2.1.2014)

Sadhvi Pragya Singh Thakur was today acquitted along with seven others by a local court in the murder case of RSS parcharak Sunil Joshi for lack of evidence. Read more »

Sadhvi Pragya Singh Thakur, who was on a fast-unto-death for not being allowed to take a holy dip during the ongoing Simhastha Kumbh at Ujjain, is expected to offer prayer at Mahakaleshawr Temple on Thursday after a ‘snan’ in the Kshipra river. Read more »

Sadhvi Pragya Singh Thakur, against whom the NIA recently dropped charges in the 2008 Malegaon blast case, on 16th May 2016 launched a hunger strike in a hospital here for not being allowed to visit Kumbh fair in Ujjain despite a court order in her favour. Read more »

The Special Judge S D Tekale hearing Malegoan 2008 blast case rejected the bail plea of Sadhvi. The bail was filed mainly on the grounds of health of Sadhvi who is suffering from breast cancer.
Read more »