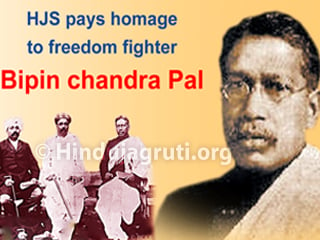 Bipin Chandra Pal was born on 7th November 1858 in Poil Village, Habiganj District, now a part of Bangladesh, in a wealthy Hindu Vaishnava family. B.C. Pal is known as the ‘Father Of Revolutionary Thoughts’ in India and was one of the freedom fighters of India. He was one of the mightiest prophets of nationalism who fought bravely for a noble cause of India’s independence. He was a great patriot, orator, journalist and a great warrior who till the end fought for the freedom of India. He was admitted to Presidency College in Calcutta but unfortunately could not complete his education and started his career as a headmaster. In the later years, while Bipin was working as a librarian in Calcutta public library he met many political leaders like Shivnath Shashtri, S.N Banerjee and B.K. Goswami. He was influenced to quit teaching and start up a career in politics. He was further inspired by the work, philosophy, spiritual ideas and patriotism of Bal Gangadhar Tilak, Lala Lajpat rai and Aurbindo. Being highly influenced and inspired by all these political leaders, Bipin decided to devote himself to the freedom struggle. He also went to England to study comparative ideology in 1898. In a span of one year he returned to India and since then he started preaching local Indians with the idea of Swaraj. Being a good journalist and orator he always used articles, speeches and other write ups to spread nationalism, humanity and social awareness and the need for complete independence. Pal had ‘never say die’ attitude and with great courage he participated in Bombay session of Indian National Congress in 1904, Partition of Bengal in 1905, Swadeshi Movement, Non Cooperation Movement and Bengal Pact in 1923.

He was one amongst the three famous patriots, known as the trilogy of Lal Bal Pal. The other two were Lala Lajpat Rai and Bal Gangadhar Tilak. He was one of the main architects of the Swadeshi movement. He stood against the partition of Bengal. The trio stood for the ideal of Swaraj or complete political freedom to be achieved through courage, self-help and self-sacrifice.  The three of them were responsible for initiating the first popular upsurge against British colonial policy in the 1905 partition of Bengal, before the advent of Gandhi into Indian politics. They advocated extremist means like boycotting British manufactured goods, burning Western clothes made in the mills of Manchester and strikes and lockouts of British owned businesses and industrial concerns to get their message across to the British. He was imprisoned for six months on the grounds of his refusal to give evidence against Sri Aurobindo in the Bande Mataram sedition case.

A journalist himself, Pal used his profession in spreading patriotic feelings and social awareness. . He had also published a lot of journals, weekly and books to spread nationalism and the idea of Swaraj. Most prominent books of Pal include Indian Nationalism, Nationality and Empire, Swaraj and the Present Situation, The Basis of Social Reform, The Soul of India, The New Spirit and Studies in Hinduism. He was the editor of the ‘Democrat’, the ‘Independent’ and many other journals and newspapers.”Paridarsak” (1886-Bengali weekly), “New India”: (1902-English weekly) and “Bande Mataram” (1906-Bengali daily) and “Swaraj” are some of the journals started by him.He was among the first to criticize Gandhi or the ‘Gandhi cult’ since it `sought to replace the present government by no government or by the priestly autocracy of the Mahatma. Pal opposed Gandhiji’s non-cooperation Movement of 1920. His criticism of Gandhi was persistent beginning with Gandhi’s arrival in India and open in 1921 session of the Indian National Congress where he delivered in his presidential speech a severe criticism of Gandhi’s ideas as based on magic rather than logic. Pal virtually retired from politics from 1920 though he expressed his views on national questions till his death. He expired on 20th may 1932 leaving behind a remarkable feeling of free India and India had then lost its ardent freedom fighter !